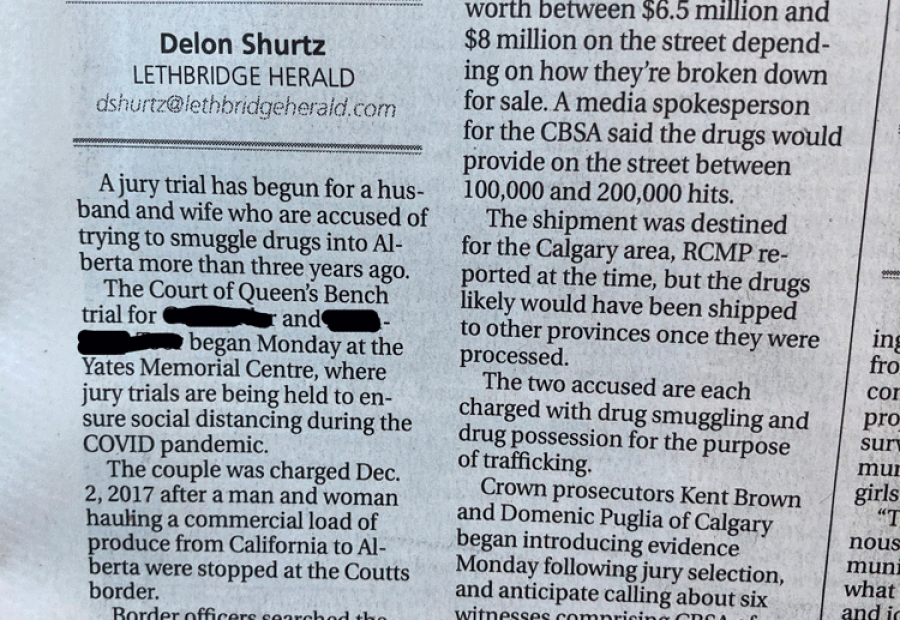 A jury trial has begun for a husband and wife who are accused of trying to smuggle drugs into Alberta more than three years ago.

The Court of Queen’s Bench trial for [the accused] and [the accused] began Monday at the Yates Memorial Centre, where jury trials are being held to ensure social distancing during the COVID pandemic. The couple was charged Dec. 2, 2017 after a man and woman hauling a commercial load of produce from California to Alberta were stopped at the Coutts border.

Border officers searched the cab of the truck and found 84 bricks of cocaine weighing 99 kilograms, considered at the time to be the largest cocaine seizure recorded by the Canada Border Services Agency in Alberta’s history.

RCMP reported the drugs were worth between $6.5 million and $8 million on the street depending on how they’re broken down for sale. A media spokesperson for the CBSA said the drugs would provide on the street between 100,000 and 200,000 hits.

The shipment was destined for the Calgary area, RCMP reported at the time, but the drugs likely would have been shipped to other provinces once they were processed.

The trial was initially scheduled to run a year ago, but it was cancelled because of the pandemic.